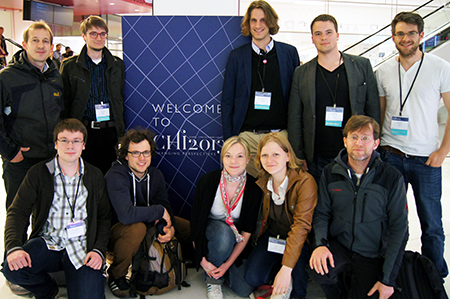 April 26th we went to Paris for the world’s biggest conference in the field of human-computer interaction, the ACM CHI 2013 (Photo gallery). With us we brought three Full Papers, an Interactivity and four Workshop Papers. Also, we co-organized two full day workshops. Reason enough for our bus to be fully booked, even though we 10 only made up fraction of the record-breaking 3450 attendants.

On Saturday, Sophie Stellmach and Raimund Dachselt organized the successful workshop Gaze Interaction in the Post-WIMP World, where student Fabian Göbel presented a contribution on the combination of gaze and foot-interaction. Sunday’s Blended Interaction workshop, co-organized by Raimund Dachselt together with colleagues from Constance and elsewhere was a special success, because we not only had very good articles but also three keynotes by Robert Jacob, Michel Beaudouin-Lafon and Andy Wilson. Ulrike Kister here gave an insight into our research on transparent tangibles. At other workshops, Ulrich von Zadow presented our work on Powerwalls and scalability, while Wolfgang Büschel presented current work with flexible, transparent displays.

The actual conference started on Monday morning in the Palais des Congrés with the opening keynote by Paola Antonelli (Museum of Modern Arts, New York), presenting interactive art from the MOMA. This was the starting signal for numerous sessions, demos, courses, poster presentations and other events during the next four days. Among the presenters were Sophie Stellmach and Ulrich von Zadow, presenting their papers on Gaze-supported Selection, Positioning, and Manipulation of Distant Targets and SimMed: Combining Simulation and Interactive Tabletops for Medical Education respectively. During the breaks, many people were interested in our Interactivity Gaze-supported Foot Interaction in Zoomable Information Spaces. We are happy that the four students Fabian Göbel, Konstantin Klamka, Andreas Siegel and Stephan Vogt presented this Interactivity and made it an eyecatcher.

Two more interesting keynotes by the legendary Vint Cerf and the French sociologist and philosopher Bruno Latour impressively topped the exiting week. After our work, we recalled the events while enjoying the french cuisine and a little bit of wine (see Photo Gallery). Thanks everyone for “our” successful CHI – and see you next year in Toronto.