Successful Participation at the IEEE VIS 2018 in Berlin 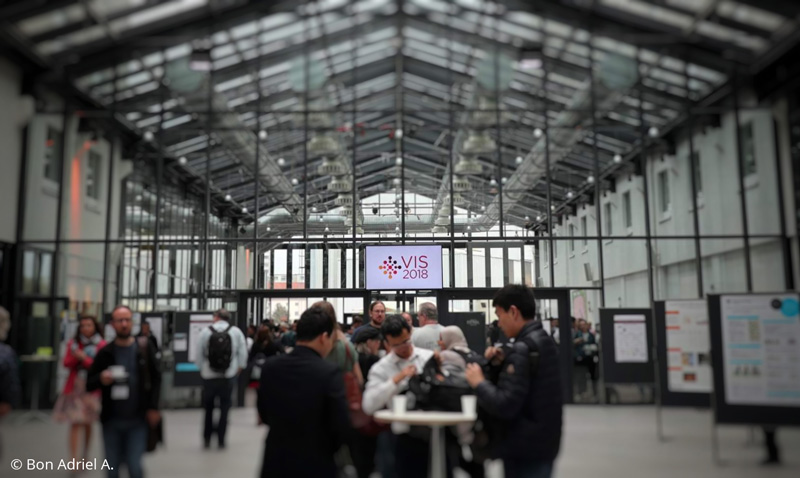 For the second time in its history, the IEEE VIS conference took place in Europe: from October 21 to 26, researchers, students, and practitioners from all over the world came together in Berlin to present and discuss the latest developments in visualization research. From the Interactive Media Lab, Ricardo Langner, Tom Horak, and Raimund Dachselt participated and presented our own work. On Wednesday, Ricardo gave a well-received talk on our paper evaluating Multiple Coordinated Views at Large Displays for Multiple Users. Later on Wednesday, Tom and Ricardo showed two posters during the poster session: Comparing Rendering Performance of Common Web Technologies for Large Graphs and Towards Visual Data Exploration at Wall-Sized Displays by Combining Physical Navigation with Spatially-Aware Devices, respectively.

Once again, IEEE VIS was an exciting event with a multitude of inspiring work and plenty of social networking opportunities. We collected some impressions in a photo gallery; the twitter discussions under the hashtag #ieeevis provide even more.

The week-long conference consists of three tracks: IEEE Visual Analytics Science and Technology (VAST), IEEE Information Visualization (InfoVis), IEEE Scientific Visualization (SciVis). The papers presented in these tracks will be published in a special issue of the IEEE Transactions on Visualization and Computer Graphics (TVCG) journal. The dense and interesting conference program is completed by a number of tutorials, workshops, panels, as well as an art program. Next year, the conference will take place in Vancouver, BC, Canada from October 20 to 25.