In times of big data information visualization is becoming increasingly significant. Especially high-resolution wall displays are well suited for displaying complex information spaces. In order to make increasingly large amounts of data managable it is not only necessary to choose suitable forms of visualization but also well thought out concepts for interaction. Mobile devices such as smartphones and tablet computers are suitable for interaction with diplay walls because of their inherent portability. In this paper interaction concepts for graph exploration and filtering were developed using a high-resolution display wall and mobile device. In doing so basic visualization and graph tasks were identified, which can be realized with the introduced concepts. In this context the display wall usually serves as an overview for graphs while detailed information is being displayed on the mobile device. Based on this combination of mobile device and display
wall the suitability of physical interaction and metaphors for exploration and filtering has been examined. For this purpose the position and orientation of the mobile device was captured by a marker-based tracking system. By moving the device in the physical space in front of the display wall new types of interaction are possible. Part of the developed concepts has been implemented by a prototype and tested with graphs containing thousands of nodes and edges. 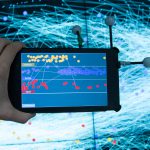 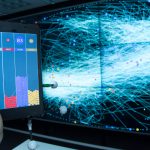 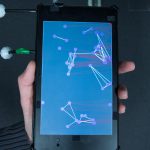