A conceptual framework enabling analysts to explore data items, track interaction histories, and alter visualization configurations through mechanisms using both a smartwatch and a large display in combination. 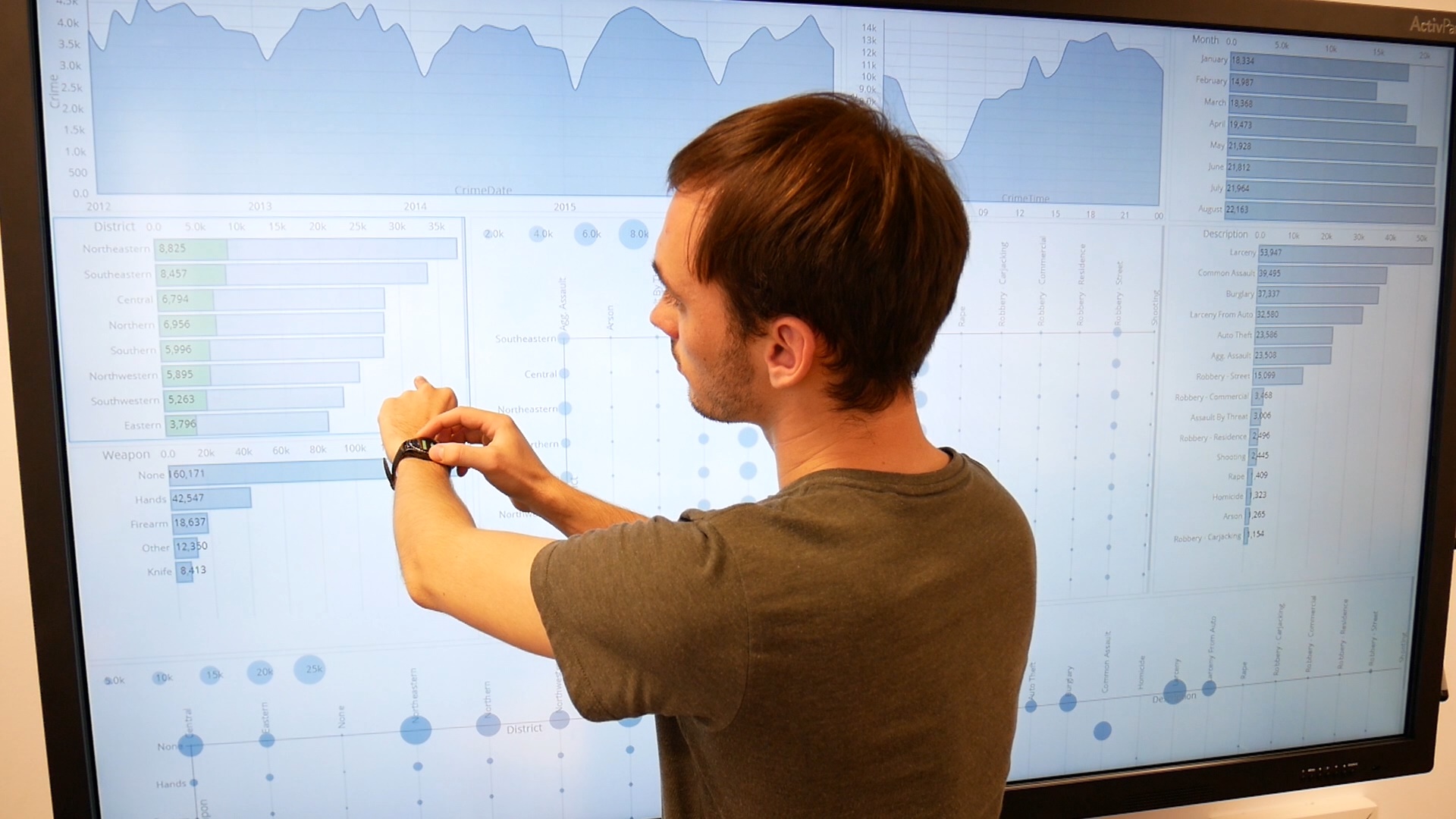 In a hurry? We also have a 30-second preview video.

We explore the combination of smartwatches and a large interactive display to support visual data analysis. These two extremes of interactive surfaces are increasingly popular, but feature different characteristics—display and input modalities, personal/public use, performance, and portability.

In this paper, we first identify possible roles for both devices and the interplay between them through an example scenario. We then propose a conceptual framework to enable analysts to explore data items, track interaction histories, and alter visualization configurations through mechanisms using both devices in combination.

We validate an implementation of our framework through a formative evaluation and a user study. The results show that this device combination, compared to just a large display, allows users to develop complex insights more fluidly by leveraging the roles of the two devices. Finally, we report on the interaction patterns and interplay between the devices for visual exploration as observed during our study.

The David meets Goliath paper has been presented at the ACM CHI 2018 (Montréal, Quebec, Canada) in the Visualization Beyond the Desktop session.
The slides of the talk are available as a PDF.

Honorable Mention We are particularly pleased that we received the honorable mention award (top 5%) for our paper at the conference.

Roles of the Devices

Each of the two devices—smartwatch and large display—has a specific role during visual analysis: By virtue of its size, the large interactive display serves as the primary display that provides visualizations of a dataset and can be used by analysts in parallel. In contrast, the smartwatch is a personal—and significantly smaller—device only used by its owner. Consequently, the watch is suitable as a secondary display, that can act as a user-specific storage for points of interests or parameter settings, as a mediator altering system reactions, or as a remote control by for distanced interaction.

Elementary Interaction Principles on the Smartwatch

We propose to primarily use three interactions on the watch: swiping horizontally, swiping vertically, and rotating a physical control of the smartwatch (e.g., rotatable bezel or crown). Further, using the internal sensors of the smartwatch, the users’ arm movements can be used to support pointing. For transferring content, the axis along the arm is most suitable: swiping towards the shoulder can pull content from the large display onto the smartwatch, swiping from the wrist towards the hand (towards the large display) can allow to push content back. Additionally, the orthogonal axis can be used for scrolling through stored content.

Scope of Interactions in Multi-User Setups

In common coordinated multiple view (CMV) applications, changes in one visualization (e.g., selection, filter, encoding) have global impact, i.e., are applied to all views. To avoid interference between analysts working in parallel, the effects of an interaction should only be applied to the visualization(s) currently in focus of the analyst as well as constrained to a short time period: when applying a selected adaptation via the smartwatch, the resulting change is only visible for a few seconds. At the same time, it must be possible to keep the altered data visualization permanently.

Sets The primary role of the smartwatch is to act as a personalized storage of sets. We define sets as a generalized term for a collection of multiple entities of a certain type. In our framework, we currently consider two different set types: data items and configuration properties (e.g., axis dimension, chart type). These sets can also be predefined; for instance, for each existing axis dimension, a corresponding set is generated. On the smartwatch, the stored sets are provided as a list. Consistent with the set notion, sets of the same type can be combined using set operations (i.e., union, intersection, complement). 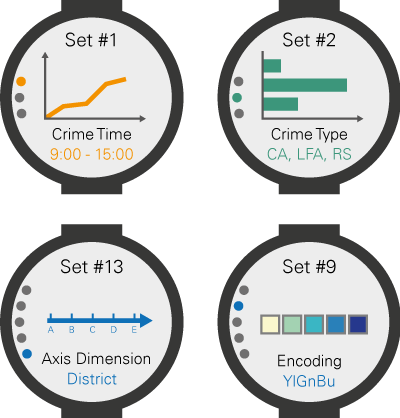 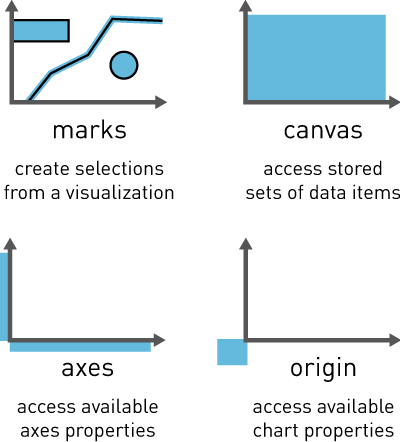 Connective Areas We define four zones for each visualization—called connective areas (CA)—that will provide the context (what) of an interaction: the marks, canvas, axes, as well as a special element close to the origin. Connective areas define the set type and control the functionalities accessed on the two devices. To focus on a CA, the interaction comprises of tapping or circling marks (i.e., data points) for selection. For other CAs, user can set the focus in two ways: by performing a touch-and-hold (long touch), the focus is set onto the respective area underneath the touch point but stays only active for the duration of the hold; by performing a double tap, the focus is kept as long as not actively changed. Setting the focus activates suitable functionalities for the specific connective area on the watch. On focus, stored set content can also be previewed on the large display.

Pull To pull (i.e., create) a set, the analyst first selects marks in the visualization on the large display by tapping or lasso selection, and then swipes towards herself on the watch. The resulting set is stored on the smartwatch. Besides data items, visualization properties can also be accessed and adapted. We distinguish between axis properties (e.g., dimension, scale) and chart properties (e.g., chart type, encoding). These configuration sets are mostly predefined.
Manipulate The smartwatch also offers the possibility to manipulate and combine sets on the watch; by performing a long tap on a set, these operations are shown in a menu. For all set types, this involves the possibility to combine sets based on a chosen set operation (e.g., union or intersection), which results in a new set. For sets containing data items, sets can also be bundled. Furthermore, it is possible to create new filters and change the set representation on the watch.
Preview By setting the focus to a view on the large display, the set currently in focus on the watch gets instantly previewed on the target visualization. Depending on the visualization type and the encoding strategy (aggregated vs. individual points), the items are inserted as separate elements or highlighted. As the focus is set on a connective area, the smartwatch can still be used for switching through the list of stored sets and preview others for comparison.
Push To permanently push the changes to the view on the large display, a horizontal swipe towards the large display, i.e., the visualization, can be performed on the watch. As push is considered a concluding interaction, the system then switches back to a neutral state by defocusing the view.
Looking for more details? Have a look at our CHI paper!

Our framework addresses a wide range of tasks, here illustrated by mapping two established task classifications by Brehmer and Munzner [13] and Yi et al. [58] onto interaction sequences that are enabled by our framework (examples given in italics). For some tasks, certain aspects are also still supported by the large display itself, e.g., zooming and panning from abstract/elaborate and explore [58]. Regarding the typology by Brehmer and Munzner [13], we focus on their how part. From this part, a few tasks (encode, annotate, import, derive) are not considered as they are going beyond the scope of this paper. CA: Connective Area.