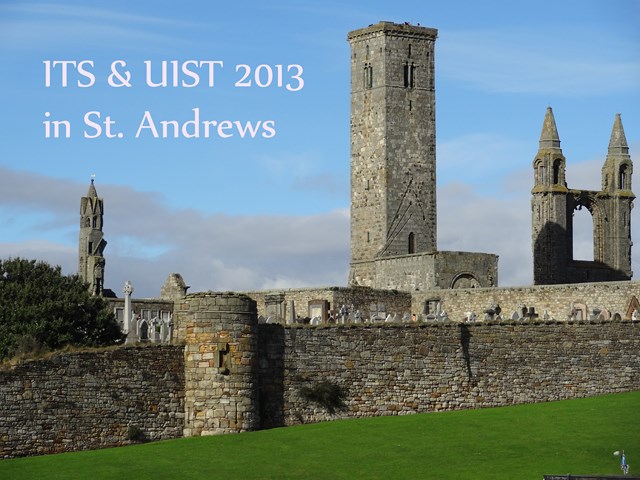 From October 6 to 11, Ulrich von Zadow, Matt Oskamp and Raimund Dachselt attended the ACM Conference on Interactive Tabletops and Surfaces (ITS) followed by the 26th ACM UIST Symposium. Both conferences took place back to back in beautiful St. Andrews, Scotland, which is not only the home of golf, but also of the oldest Scottish University. It just celebrated its 600th anniversary.

As Keynote Chair and PC member, Raimund Dachselt helped organizing the conference. Together with Nick Graham, he announced next year’s edition of ITS, which will be held in the city of Dresden, a baroque beauty in Germany. Ulrich von Zadow presented his SimMed demo on a (quite heavy :-) tabletop. Even though the box arrived too late, it was a great success with many interested visitors.

Jeff Han from Perceptive Pixel Division at Microsoft gave the ITS keynote From Academia to Acquisition, Raffaello D’Andrea from ETH Zurich the UIST keynote on Humans and the Coming Machine Revolution. A picture gallery shows impressions from both inspiring events and the old city at the North Sea.